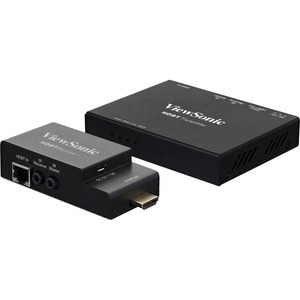 Take your digital video installations to new lengths with the high-performance, small form factor ViewSonic® HB10B HDBaseT® Transmitter and Receiver kit. Featuring an integrated HDMI connector, as well as a miniature form factor, the HDBaseT receiver seamlessly integrates into almost any display device with an HDMI input. Utilizing HDBaseT technology, the HB10B kit is capable of sending uncompressed HD video and audio from over 200ft. away via network cable. With an integrated IR blaster and receiver ports, the HB10B kit lets you take control of your media equipment on both ends with bi-directional control. The HDBaseT receiver comes equipped with PoC and micro USB power, making it one of the most versatile receivers in the market. In addition to seamlessly integrating with almost any HDMI-based display devices such as televisions, large format displays, digital signage, etc. the HDBaseT receiver also fits into any PortAll® compartment available on select ViewSonic® projectors - enabling you to discreetly stream uncompressed multimedia content from set-top boxes, Blu-ray players, AV receivers and more.